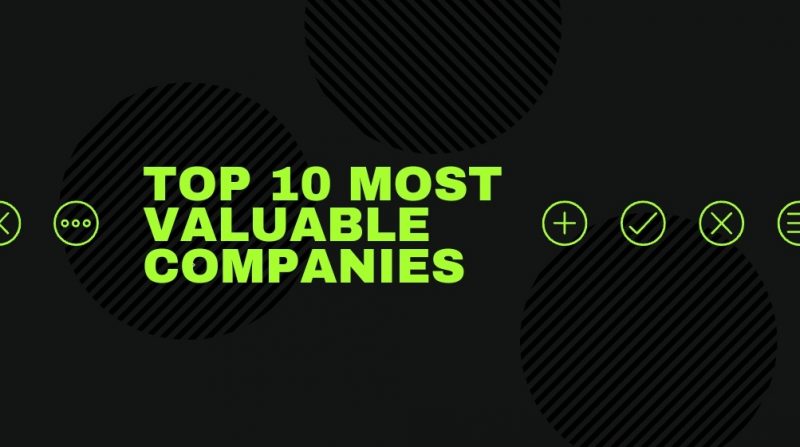 Hello guys, While reading your comments for our previous “The Top 10s” articles, we have noticed that some of you guys are requesting the complete information about Top 10 Most Valuable Companies in the World.

So in this article we are going to discuss about Top 10 Most Valuable Companies in the World. So let’s get started.

Top 10 Most Valuable Companies in the World

Apple is one of the most valuable companies around the world. Experts of rating agencies evaluated its worth at about $2,200 billion as of January 2021. It initially started by producing home computers and PC models. But its incredible success comes from iPhones and iPad tablets. It produces several numbers of products.

However, the characteristics of Apple’s products are their high-quality and stylish design. Not to mention the incredible marketing techniques by its founder Steve Jobs. At the moment, it has thousands of offices, brand stores, and service centers all around the world.

This is another firm building its success by venturing into the IT industry. It was founded by Bill Gates, who thrones most of the time as the World’s Richest Man. Microsoft’s amazing success journey began by developing an intuitive and easy to use Microsoft Windows Operating System.

This allowed any ordinary man to use computers without any special skills, hence its worldwide popularity.

As of January 2021, it is the topmost valuable company in the world. In 2019, it was evaluated at the all-time highest at $1.9 trillion as a result of the successful issuance of its share on the Stock Exchange. Today, it is valued at $2,500 billion.

The company intends on becoming the leader in the production of Liquified Natural Gas – if it hasn’t yet already. Its main office is located in Dahran and has worldwide branches including branches in China, Japan, the USA, UAE, and the UK.

Tesla is the world’s largest electric car manufacturer and has been dominating the car world. Its market cap increased by $500 billion in 2020. It is now worth as much as the combined worth of the next NINE largest car companies worldwide.

It was evaluated at $830 billion in January 2021 and has a bigger market valuation than Facebook. It has been blooming due to the high-intellectual abilities of Elon Musk. He joined Tesla as the main investor and became the chairman of the board of directors. Besides cars, Tesla also produces solar panels and batteries.

Facebook was developed by Mark Zuckerberg in 2004 and it has now more than 2 billion daily active users. It is considered normal to have a Facebook account and it is often surprising when someone doesn’t have one.

Through the power of advertising, it generates $22 billion in pure profits. It is now quite impossible to replace Facebook now. And with the hefty budgets of Facebook, it wouldn’t hesitate to buy up and coming firms that can pose a slight challenge to it.

In terms of valuation, Tencent gives tough competition, and at times, has surpassed tech giant Facebook in the past. This Chinese firm is now evaluated at about $738 billion and was founded in 1998.

Tencent derives its success from the technology sector and gaming industry. With the outbreak of COVID-19, its profits skyrocketed because of more people downloading its apps and games.

Even the technology war between the US and China – US banning Chinese apps – has made only a little dent in Tencent’s total revenues.

Alibaba is one of the biggest Virtual trading platforms in China and the world. It attracts millions of users due to its incredibly wide range of products at amazing price points. Alibaba utilizes the power of the internet and the efforts of Chinese businesses to create a faster, smarter, and more efficient business environment.

It started as a platform that connected buyers and sellers. With time it advanced towards almost every type of business such as advertising, marketing, affiliate marketing, etc. It does everything that Amazon, Google, eBay, and many wholesalers do, and combines them into one single, giant platform. Alibaba Group is valued at $620 billion.

Amazon has been there for a longer time than Alibaba. With the wisdom of years, it has adapted well to the technologies of changing world. It was founded in 1994 by Jeff Bezos.

It is an American retail company that sells products all over the internet. It throned as the most expensive company in the world in January 2019. It is now evaluated at a whopping high of $1,596 billion.

Its popularity arises from its:

Alphabet is the parent company of Google and draws 99% of its core revenue from Google’s business. By referring to Alphabet, we are mostly talking about Google.

The businesses YouTube, advertising, search, maps, and Android, all fall under the domain of Alphabet. Although Google search is its top-most successful and revenue-generating function, there is one other function that dominates the internet.

It is the Search Engine Optimization (SEO) – previously known as PageRank. Today, Alphabet valuates at $1,203 billion.

Delta Electronics was founded by Bruce Cheng in 1975. It engages in the design, manufacture, sale, research, and development of a wide range of products. It evaluates at $1,435 billion as of January 20212.